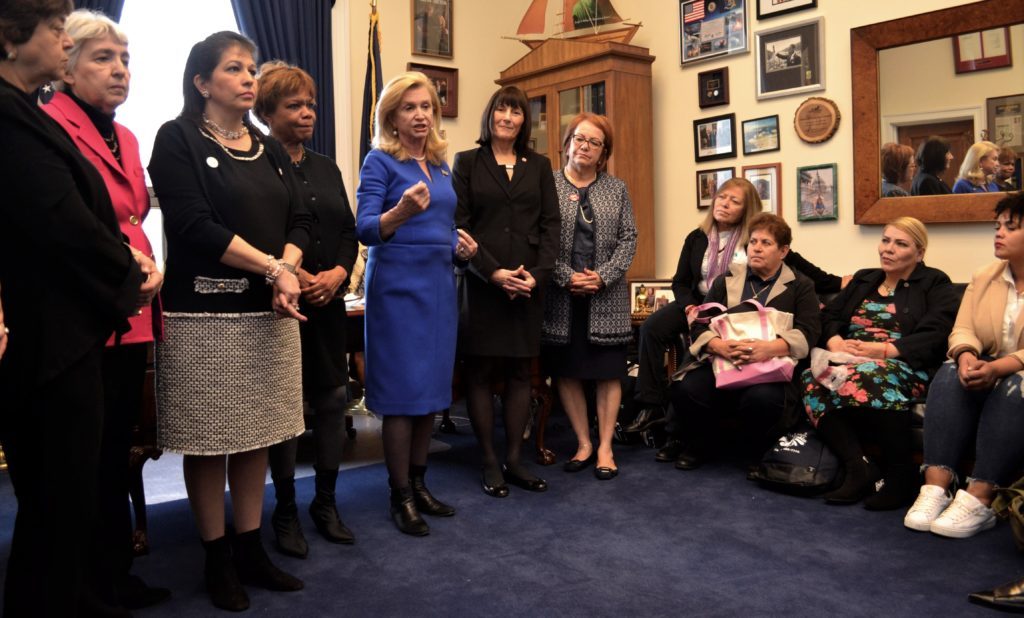 “To combat sexual harassment and assault, we need to create lasting change both in our legal system and our culture. I believe that the Equal Rights Amendment is the foundation for this change. If women have Constitutional protections, we can finally stamp out inequality in all its forms, whether that be sexual harassment and assault, the ‘pink tax,’ pregnancy discrimination, or unequal pay for equal work,” said Rep. Maloney. “We also need stronger laws to combat sexual harassment here in Congress and across all industries. I have introduced two bills that go after sexual harassment in the private sector. The Ending Secrecy About Workplace Sexual Harassment Act requires corporations to annually report to the Equal Employment Opportunity Commission the number of out-of-court settlements reached dealing with employee claims of sexual harassment, assault or discrimination. The No Tax Deductions for Sexual Harasser Buyouts Act stops taxpayer money from subsidizing buyouts to sexual predators. Harassment is not an ordinary business expense. Harassment is the abuse of women, and every employer must be serious about preventing it.”

“Enough is enough; women cannot and must not be forced to continue to suffer in silence. Our message is clear; when it comes to sexual harassment, sexual assault or gender-based discrimination at our place of work and everywhere—time’s up,” said Congresswoman Brenda Lawrence (D-MI). I am encouraged that with dedication and relentless pursuit, we can change this hurtful and harmful workplace culture. No one should ever have to endure sexual harassment in their place of work, and we are here to make the strong statement that harassment, intimidation and unwanted advances cannot and will not be tolerated.

“Over the last few months, very brave women have brought attention to a toxic problem that has been rampant in our society for a very long time,” says Toni Van Pelt, president of NOW. “The conversation about sexual harassment and assault needs to include both the stories of survivors and new ways to address and prevent hostile environments in workplaces and school in order to end the culture of abuse of women.”

“Beyond just the workplace, we cannot leave out students and educational institutions when we’re talking about rampant sexual harassment and assault,” says Eleanor Smeal, president of the Feminist Majority. “One in five women students are survivors of campus sexual assault. The movement on campuses, led by student activists, is growing and cannot be ignored.

“Sexual harassment and assault is a serious problem in the hospitality industry, and that is why since 2012, UNITE HERE has been fighting for and winning new protections to keep our workers safe,” says Maria Elena Durazo, general vice president for immigration, civil rights, and diversity, UNITE HERE.

“Women employed in every industry and sector, including agriculture and other low-paid positions, have historically confronted wide-spread workplace sexual violence,” says Mónica Ramírez, president of Alianza Nacional de Campesinas. “It is more important than ever before that we unite to find solutions to ensure that all women can work with dignity and without fear of violence against them.”

“The best way to deal with sexual harassment is to focus on prevention. Prevention of sexual harassment in the workplace starts with teaching young women to value their own bodies and healthy relationships, and to understand their rights”: says Carol Baldwin Moody, president and CEO, Legal Momentum. “Knowing their rights is especially important for the most vulnerable women, such as women of color, immigrants, and low-wage working women. When we say Enough Is Enough, it means we are intent on stopping and preventing this harassment behavior.”

“In order to change the culture around sexual violence, we must also center the voices of women of color whose stories often fall through the cracks in and out of their communities,” says E. Faye Williams, president of the National Congress of Black Women. “We need to create a space that allows women of color the opportunity to speak on solutions that will work for the specific needs of their communities.”

“We are calling for a radical shift in how our government and institutions investigate complaints of harassment and sexual violence,” says Carol Robles-Román, national board member of NOW and co-president, ERA Coalition. “We insist that a renewed culture of system-wide accountability and enforcement of basic rights take hold with national partners leading the way.”

“Sexual harassment in the workplace is not new. It has been 50 years since the passage of the Civil Rights Act that declared sexual harassment and sex discrimination illegal,” says Nancy Kaufman, CEO, National Council of Jewish Women. “We are dedicated to ending harassment once and for all – in Jewish and secular work places.“

There are no upcoming events at this time.

Help Those Affected by Hurricane Harvey!

Submit Your Vision for Equality

Short description about your NOW chapter in this footer section.